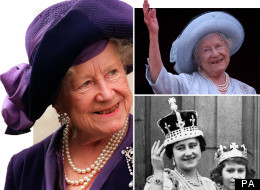 1.  Because after the Nazis came close to killing her and her husband King George VI when they bombed Buckingham Palace in 1940  http://www.youtube.com/watch?v=N5-3QRKz3CY

and it was suggested that they leave England for their own safety, she said,

2.  Because after the bombing of Buckingham Palace she said of the East End of London which was heavily strafed by the German Luftwaffe, “I’m glad we’ve been bombed. It makes me feel I can look the East End in the face.”

3.  Because Adolf Hitler is said to have called her “the most dangerous woman in Europe” because of her effect on British morale.

2.  Because one evening she reputedly called down to her gay staff members of whom she was fond saying, “Would you young queens please bring this old Queen a glass of gin?”

3.  Because she said in her official biography, Queen Elizabeth the Queen Mother:

“Wouldn’t it be terrible if you’d spent all your life doing everything you were supposed to do, didn’t drink, didn’t smoke, didn’t eat things, took lots of exercise, all the things you didn’t want to do, and suddenly one day you were run over by a big red bus, and as the wheels were crunching into you you’d say ‘Oh my God, I could have got so drunk last night!’ That’s the way you should live your life, as if tomorrow you’ll be run over by a big red bus.”

2 thoughts on “Why We Loved the Queen Mum”

The Cottage in England

Inglenooks, bats, beams, and the death watch beetle: restoring a 300-year-old farmhouse and barn in the Peak District of Derbyshire

. . . the home of the bean and the cod, not to mention liberalism, history, the "shot heard 'round the world"--and holding it together after the Boston Marathon Bombing.

The Year of Living Englishly